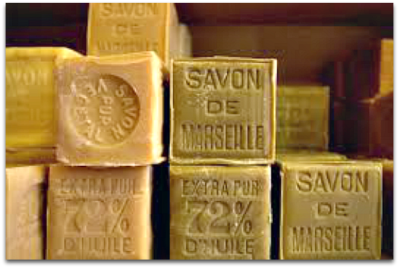 You probably already know that the French people have given us great art, food, and wine. But, their many talents don’t end there.

Aside from Monet, coq au vin, and Bordeaux they make a great bar of soap, too!

In the ninth century, master soap makers (Maitre de Savon) in the Marseille region of France began hand crafting bars of gentle and pure soaps. They used olive oil and alkaline ash from the marine plants of the Mediterranean. Later, they came to be known as “Savon de Marseille” or Marseille Soap.

This fine product grew in popularity and by the 1880s there were close to 100 soap works in the region.

The 1900s brought mass-produced synthetic soaps and detergents along with washing machines. This made soap blocks less necessary, but many households continued to use and trust the purity and gentleness of this special product.

Today there are less than five soap makers still producing Savon de Marseille according to the centuries old tradition.

It takes two weeks for the Maitre de Savon to make a batch of soap. The mixture of olive oil, alkaline ash, and sea salt is heated for ten days in antique cauldrons, then poured in open pits to harden. The next step in the process is to cut it into cubes, stamp it, and let it dry.

The fine white layer of sea salt disappears once the soap gets wet. It’s a bit moist in the beginning and will last longer if allowed to dry and harden.

The Marseille Soap is traditionally green or white. The white soap is made with palm oil, the green with at least 50% olive oil. They also make a line that contains crushed flowers including lavender, orange, verbena, and rose to name a few. 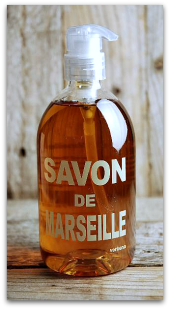 If you’re lucky enough to go to France you’ll likely find a bottle of Savon de Marseille liquid soap beside many of the sinks there.

That’s because nothing is more gentle for frequent hand-washing. Many of the chemicals in mass-produced soap products have a drying effect on the skin. The specialized formula of Marseille Soap includes moisturizers.

This liquid version also contains olive and palm oils and is all-natural and lightly scented. Many companies have tried to copy the formula, but have been unsuccessful.

Some additional features of Savon de Marseille are:

These high-quality bars of soap make terrific gifts…for yourself and others!

Stop in and check out these delightful soaps the next time you’re in the store!